President Trump issued an executive order on An America-First Healthcare Plan, noting the Administration’s actions on healthcare and planned actions going forward. A federal district court halted the repeal of certain provisions of the prior final rule on Section 1557 of the Patient Protection and Affordable Care Act (ACA).

The Department of Labor (DOL) released additional temporary regulations on the leave laws under the Families First Coronavirus Response Act (FFCRA) in response to a federal district court’s invalidation of certain provisions under the original temporary regulations issued by the DOL. The Office for Civil Rights (OCR) and the Office of the National Coordinator for Health Information Technology (ONC) released the Department of Health and Human Services (HHS) Security Risk Assessment Tool Version 3.2.

The Executive Order instructs the Departments of the Treasury, Labor, Health and Human Services, and Veterans Affairs to maintain and build upon existing actions to 1) expand access to and options for affordable healthcare, 2) ensure consumers have access to meaningful price and quality information prior to the delivery of care, 3) reduce waste, fraud, and abuse in the healthcare system, and 4) improve quality in the delivery of care for veterans. For example, the Executive order instructs HHS, in coordination with the FDA, to expand access to affordable medicines through actions such as accelerating approvals of new generic and biosimilar drugs and facilitating safe importation of affordable drugs from abroad. The Executive Order provides that HHS shall work with Congress to reach a legislative solution by December 31, 2020, to end surprise billing. If no legislative solution is reached by that date, the Executive Order instructs HHS to take administrative action to prevent patients from receiving a bill for out-of-pocket expenses that the patient could not have reasonably foreseen. The Executive Order also instructs HHS to update Medicare.gov to inform beneficiaries of hospital billing quality and to continue to promote medical innovations to find new and improved treatments for COVID-19, as well as other conditions.

As background, Section 1557 of the ACA provides that individuals shall not be excluded from participation in, denied the benefits of, or be subjected to discrimination under any health program or activity which receives federal financial assistance from HHS, on the basis of race, color, national origin, sex, age, or disability.

In light of the Supreme Court’s opinion, on August 17, 2020, the U.S. District Court for the Eastern District of New York issued an order halting the repeal of the 2016 rule’s definition of discrimination on the basis of sex (i.e., that “on the basis of sex” includes pregnancy, false pregnancy, pregnancy termination, or recovery from childbirth or related medical conditions, sex stereotyping, and gender identity.) that was repealed under the final rule issued on June 12, 2020.

In light of the Supreme Court’s opinion, on September 2, 2020, the U.S. District Court for the District of Columbia issued an order providing a preliminary injunction halting the repeal of the 2016 rule’s definition of discrimination on the basis of sex, but only to the extent that it included “sex stereotyping.

Read more about the Section 1557 final rule and court cases.

As background, the DOL released temporary regulations implementing the Emergency Family Medical Leave Expansion Act (EFMLEA) and the Emergency Paid Sick Leave Act (EPSLA) provisions under the Families First Coronavirus Response Act (FFCRA). The EFMLEA provides qualifying employees with paid sick leave during the COVID-19 crisis to care for a child absent from school due to school closure or childcare unavailability. The EPSLA provides employees with paid sick leave for self-care and family care due to possible COVID-19 contraction and exposure, as well as paid childcare leave.

See the these UBA Advisors for more information:

Under the PRO Good Guidance rule, unless a law otherwise permits or the guidance is incorporated into a contract, cooperative agreement, or grant, guidance itself cannot impose binding requirements. For guidance to be binding, it must go through notice-and-comment procedures. The rule sets forth special requirements for guidance that is determined to be “significant guidance” by the Office of Management and Budget’s Office of Information and Regulatory Affairs. For DOL guidance issued jointly with other federal agencies, the DOL may take a modified approach for issuing binding guidance.

The PRO Good Guidance rule applies to guidance issued, modified, or withdrawn after September 28, 2020. After this date, guidance documents that are not posted in the DOL Guidance Search page are no longer in effect. However, guidance documents not posted to the DOL Guidance Search page may still be helpful, for historical context, when complying with legally binding DOL rules and regulations. The DOL will post quarterly lists regarding guidance
documents issued, modified, or withdrawn in the immediately preceding quarter.

Question of the Month 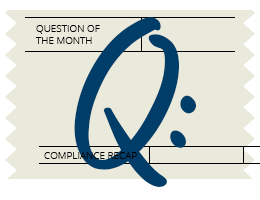 We recently received a medical loss ratio (MLR) rebate. How should the money be distributed? 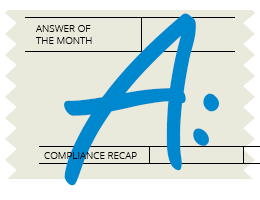 If the plan document is silent on how the rebate should be distributed, then the following general
principles apply.

How should the rebate be divided?

Employers are not required to precisely determine each employee’s share of the rebate, and so do not need to perform special calculations for employees who only participated for part of the year, moved between tiers, etc.

Insurers must send a notice to all employees who participated in the plan in 2018 stating that a rebate has been issued to the employer, so employers who choose to limit rebate payments to those who are currently participating should be prepared to explain why the rebate is only being paid to current participants. This might include the fact that since the rebate would be taxable income, the amount involved does not justify the administrative cost to locate former participants and issue a check.

Are former plan participants entitled to a share of the rebate?

For non-federal governmental plans, the interim final regulations specifically require any portion of a rebate that is based on former participants’ contributions to be aggregated and used for the benefit of current participants.

How may the employer use the rebate?

The employer may pay the rebate in cash, use it for a premium holiday, or use it for benefit enhancements. The rebate must be applied or distributed within 90 days after it is received.

A cash rebate is taxable income to the employee if it was paid with pre-tax dollars.

A premium holiday should be completed within 90 days after the rebate is received (or the rebate needs to be deposited into a trust).

Benefit enhancements include reduced copays or deductibles (which may not be practical due to the timing requirements) or wellness-type benefits that the employer would not have offered without the rebate, such as free flu shots, a health fair, a lunch and learn on nutrition or stress reduction, or a nurse line.

How should the rebate be provided?

The employer should consider the practical aspects of providing a rebate in a particular form. Generally, the larger the amount that would be due to an individual, the more effort the employer should make to directly benefit the person (either through a cash rebate or premium holiday). While benefit enhancements are permissible, a large rebate should be used to provide a direct benefit enhancement, such as a reduced co-pay, and not for a general benefit, such as flu shots.

The agencies have not provided any details as to what amount is so small that it does not need to be returned to the employee. (Insurers are not required to issue a rebate check to individuals if the amount is less than $5.00.) A cash rebate is taxable income if the premium was paid with pre-tax dollars, so issuing a check that is very small after taxes should not be necessary. If an employer knows it costs $2.00 to issue a check, issuing a rebate check for $1.00 should not be necessary. However, an employer cannot simply keep the rebate if it determines that cash refunds are not practical – it will need to use the employee share of the rebate to provide a benefit enhancement or premium reduction.